What are birthstones for each month of the year? 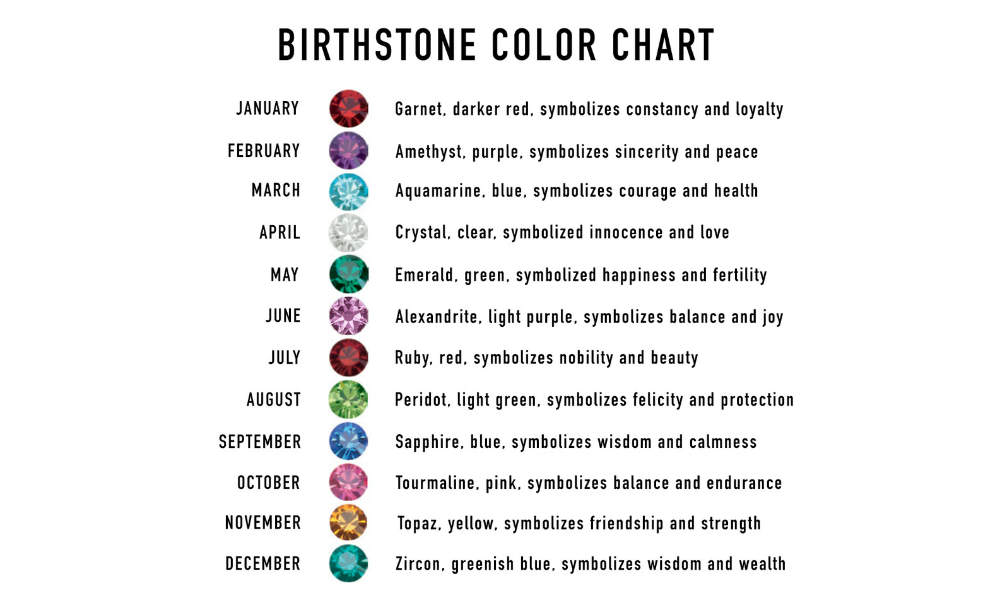 Each and every person is different and their traits can be associated with the month in which they were born. And each month has its own representing birthstone that carries some meaning and their color. So, what are birthstones? They are the gems that represent a certain month of the year.

However, some months may have one birthstone assigned to them, and some have a few, and this idea can be traced all the way back to the ancient and biblical times.

Garnet is a birthstone that can come in many colors. However, it’s most commonly known and used in its red form. It is assigned to the first month of the year and it represents a deep and lasting friendship. There is even a legend that suggests that this stone brings goodness to the person who wears it, and the person who themselves do good deeds.

Amethyst often appears to be purple and it is a variety of quartz. However, even though it is mostly purple it can sometimes appear in hues from light pink to deep purple. Through history, this birthstone has been linked to the royalty and they adorned it, as well as the clergy. According to the legend, if you wear amethyst as jewelry you will always have a clear and focused mind.

Aquamarine got its name from the sea and that is why this gem can be found in a variety of blues, just like the sea. This gem of calming colors is mostly used in jewelry, because of its serene color and many positive symbolic meanings through history. People used to believe that this gem brings protection to sailors, that it can mend friendships, rekindle love and that it can cure illnesses of spiritual, mental and physical nature.

On the other side, juxtaposed to aquamarine, we have the bloodstone. Unlike the first gem for this month, bloodstone is often dark and it has specks of red. As far as its meaning is concerned, it was believed that it has the “ability” to heal and bring good luck.

Even though the clear form is the most popular, diamonds can be found in many colors, with the purest ones being the rarest. Also, since it is a truly unique gem of unique properties, it has the ability “sparkle” like no other gem. Once, diamonds were believed to have great healing powers, but they have been popularly used a symbol of eternal love.

Just like aquamarine, emeralds come from the same mineral, but their color is not blue. Emeralds, rather, come in many shades of green and they symbolize rebirth. What is more, emeralds are believed to bring luck, youth, and foresight to the person who wears them. And what made them popular and famous is the fact that they were the favorite birthstone of Cleopatra and Elizabeth Taylor.

The first gem for June is the pearl. It is the only gem that doesn’t naturally occur, but it’s made by a living organism. Its color is creamy, but it is often dyed in various colors. Back in the day, pearls were so rare that only wealthy people wore them, but today they are affordable for everyone.

The second one is alexandrite, a very unique birthstone that changes colors. During the day it has a blue-green shade, while in fluorescent light it looks purple-red in color. Historically, this gem symbolizes creativity, learning, and intuition.

The last one for June is the moonstone, that also has unique coloring. Because of layers of color, it creates a cloudy illusion, and its prominent colors are blue and white. Additionally, its colors can range from yellow and pink to green and gray, and this stone symbolizes fertility, it encourages sleep and dreams and it is believed to protect the travelers.

When you say ruby you instantly think about its red hue, which makes it the most recognizable gem. This birthstone has been admired and loved ever since ancient times and it was especially popular in Asian countries. What this birthstone symbolizes is protection, passion, and prosperity, and it is the second most durable birthstone next to diamonds. Additionally, this gem has found its use in medicine and technology, mostly in lasers.

Peridot can be recognized by its lime green color and it’s often called the “evening emerald”. This gem is often found in meteorites and it comes to the surface by volcanoes, which makes it rare. Through history, it was believed that peridot protects its wearer from nightmares and that it brings peace and happiness.

The second birthstone of August is sardonyx, which is made of layers of sard and onyx. That is why its color can range from yellowish red to reddish brown. Unlike many other birthstones, this one has been affordable to people through history and it is said that it promotes communication, happiness, and courage.

Lastly, we have spinel, which is often mixed with other gemstones because of its wide variety of colors and cuts. It is most often mistaken for sapphires and rubies. And one variety of spinel has magnetic properties which made it perfect for use in compasses.

Even though the most common color of the sapphire is blue, it can be found in every other color except red (then it is considered to be ruby). They symbolize loyalty, integrity, sincerity, and nobility.

Opal probably has the most mystical folklore among birthstones. According to legends, opals fell from the sky; some legends say that the rainbows left opals on the ground where they touched the earth. Opals can reflect different colors and that is why people believed that they possess the quality of all the gemstones. They are also believed to bring good luck to their wearers, but only if the birthstone corresponds to your month of birth.

Just like opals, tourmaline reflects a variety of colors. It has the ability to act as a magnet if electrically charged. Also, black tourmaline used to be used as an amulet to protect you from evil. However, today, it is used to get a person rid of pollutants, toxins, and radiation.

Other gems have been mistaken for topaz because it is thought to be yellow. Actually, topaz is colorless, but it is often tinged with colors. It is viewed to be a calming stone and that it has the ability to relax people, get them rid of nightmares and even cure mental illness.

November’s second gem is citrine and it is a variety of quartz of a yellow-orange hue. Just like topaz, it has been considered to be a calming stone with the abilities to heal and soothe. Additionally, it is believed to bring prosperity, new beginnings and wealth to the person wearing it.

Tanzanite is found only in Tanzania (hence the name) and it is more a modern gemstone. Tanzanite is very similar to sapphire by its looks and its popularity really increased since it has been found in 1967.

Zircon, on the other hand, dates back 4.4 billion years and it is definitely the oldest mineral. It can be found in many colors, but the blue one is the most popular. Also, it is believed to dispel evil and to promote sleep, prosperity and wealth.

Lastly, we have turquoise which has been a popular birthstone in many cultures, such as Persian, Turkish and Native American. Turquoise is believed to adorn both weapons and jewelry and that is why it is believed to provide power and protection.

If you ever wanted to know birthstones meanings and colors for each month, there you have it. Pick your month, find the corresponding gem and you will be protected!